A few weeks ago I was sworn to secrecy by a Seattle School Board member after he/she revealed an extraordinary fact:  one of Seattle’s middle schools has had an extraordinary, if not meteoric, rise in student math performance.  A middle school with very high levels of underprivileged kids–Mercer Middle School–had student math scores equal to the best in the city.  And he/she had found out why:  without permission from the district, the school’s teachers had ditched the district’s official curricula (Connected Math), a very poor “discovery” program, for the excellent, and far more traditional Saxon Math series.  That school board member asked me and others to keep quiet about it, because if it got out the District administration (headed by Superintendent Susan Enfield) might well end the experiment.

Well, today the secret was revealed thanks to a front page Seattle Times article by Brian Rosenthal. As noted by Seattle School Director Kay Smith Blum: “They did it sort of undercover.”

How good are the results at Mercer?  How many ways can you say spectacular?  To start, here is a graphic from the Seattle Times for the percentage of 7th Grade students passing the state  math exam.  In 2005 with the WASL only 33% of the student passed the exam, compared to 47.3% of the students from the entire district.  Mercer Middle School students were lagging behind.  In 2011 with the state  MSP exam, students at Mercer WERE DOING BETTER than the district average. (NOTE:  you can’t compare the two years directly–different exams!!, but you can compare differences within the district)

But let me show you some graphics not in the Seattle Times based on this years State MSP math exam. These plot show you the performance of several middle schools, with the schools in order of percentage of students on free and reduced lunch.  The ones on the left are schools with rich demographics and the the right, students with poorer students. Mercer is the second from the right in all of them. In general you would expect the richer, more privileged students to do better for all the reasons you can suspect.  Well, first lets compare the performance of the various schools for blacks, hispanics, and asians.  Mercer is the best for blacks and hispanics, and a close second for asians. 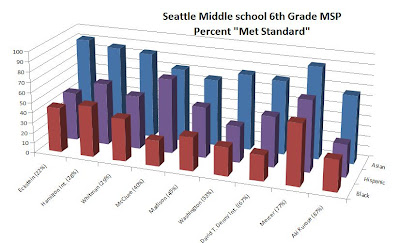 Or how about low income and limited-English kids in 6th grade?  Mercer is the best! 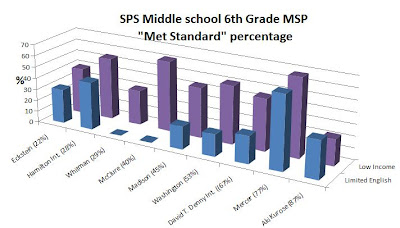 Seventh Grade?  Mercer is the best for low income and second best for limited English. 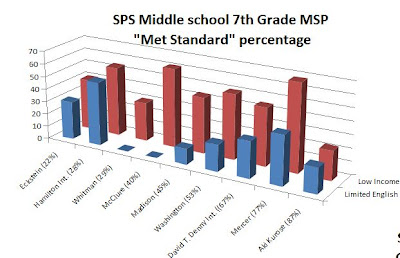 The district has had a huge problem of minority and underprivileged kids doing much worse in math than the rest of the district.  Mercer has essentially solved the problem by going against the chosen curriculum of the district.

But folks, this underground experiment is not the only in the city.  Two schools in the city: Schmitz Park and North Beach Elementary have gotten permission for limited periods to use non-discovery, more traditional math books.   The result:  HUGE increases in learning and performance of their students.    For example, Schmitz Park Elementary got permission to try Singapore Math textbooks in 2007 (traditional direct instruction).  Its students’ math scores soared: in 2010 the 5th graders had the third highest passing rate in the state on the state test, even though the school has no gifted magnet program.

In some of my previous blogs, I have also described what has happened in other districts when Discovery Math has been replaced by excellent curricula such as Saxon or Singapore.  Scores have jumped substantially in math.

Now the district administration knows about this.  In fact, Superintendent Susan Enfield was asked by the Seattle Times whether she knew about the phenomenal results at Schmitz Park and North Beach (you can watch it below).  She did and her basic answer was that they have a core (Discovery) curriculum and the district is going to stick to it.  Just amazing.  Stunning results do not matter to her at all.  In fact, Dr. Enfield is a proponent of Discovery math and pushed the Discovering Math high school series when she was curriculum head.

The bottom line of all this:  It is now absolutely clearly from a huge amount of evidence that discovery math programs don’t work and they particularly hurt minorities, the disadvantaged, and those with weaker English skills.  They also hurt the top demographics as well.  Seattle has extraordinarily poor discovery math at all levels (Everday Math-elementary, Connected Math-middle schools, Discovering Math-high schools). Suburban districts like Shoreline and Bellevue have dropped discovering math after seeing it undermine student performance.  The Seattle School District administration, led by Susan Enfield, is clearly not interested in replacing the current curricula and it is up to parents and the school board to force this issue. (As noted in my earlier blogs, discovery math is like a religion to many in the educational community, particularly schools of education.  The latest fad in a long line of failed fads).

If you are a Seattle parent let your school board member know what you think, if you are a business, let the district administration know.  Susan Enfield is now only interim and the school board will vote in the next few weeks whether to give her a permanent contract–which would be a disaster for our kids.  It is time for a change from her failed policies (and disaster like firing a popular Ingraham HS principal), and hopefully with the assistance of two new school board members, the district can finally follow logic and the evidence of student performance, and the not the ideological leanings of several in the school district administration.